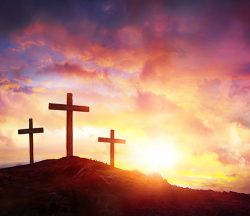 A Word to Good Friday and Easter 2016

As we began Lent this year, I encouraged you to lift up in your own Lenten thoughts and reflections the apocalyptic dimension of the crucifixion of Jesus.  The word “apocalyptic” means “to make known” or “to reveal” and expresses a worldview that encompasses both the reality that we see and the larger reality that we do not see.  Effects of sin and struggles against sin play out in the reality we see; however, the larger reality that we do not see is where the decisive victory over Sin and Death is won or lost.  On the grand scale, Christ’s crucifixion ushers out the old age and ushers in the new age.  Now I invite you to take that cosmic perspective to your thoughts and reflections on Jesus’ resurrection.

In our churches, we exchange with one another the Easter greeting “Christ is risen!  He is risen, indeed!”

Without the resurrection, Jesus crucifixion is simply one more example of an unfair death, valiantly borne by the victim of that cruelty.  There is way too much death by cruelty.  As I am typing, news outlets are trying to unpack the terror attacks in Brussels, March 22, that killed 31 people and injured 330.  These attacks have a déjà vu feel to them after the November 2015 Paris attacks.  Stories continue to surface about valiantly borne deaths in the terror attacks of 9/11.

Without the resurrection, the best that someone can hope for in the face of such loss and grief are hopes such as, “Love is stronger than death,” “Their spirits live on in our hearts and memories,” and the colorless “They are in a better place.”  A quote from Fleming Rutledge: “Nebulous messages about some sort of religious hope for an afterlife simply do not have the power to stare down the stark ugliness of death.”

What if, instead of saying “Why do you look for the living among the dead – he is not here but has risen” (Luke 24:5), the two men in dazzling clothes had met the women at the door of Jesus’ tomb and said, “The good that he did will live on,” or “Remember always what a model of strength and sacrifice he was”.  Well, that is true.  But if that were all there is, would there be a Christian church today?

There is no need to speculate.  Here is the news: “He is not here but has risen.”  Nothing wishy-washy about this.  The resurrection of Jesus Christ stares down the stark ugliness of death.  Revelation (the Apocalypse of John) trumpets the cosmic victory:

There is battle imagery here.  As I have said, battle imagery can be misused, but we miss the world-changing import of the Christian gospel if we turn away from the apocalyptic length and breadth of Jesus’ crucifixion and resurrection.  For a taste of the vim and vigor of Revelation’s witness to God’s cosmic victory through Christ, hunt up and listen to the St. Michael’s Singers version of “The Strife is O’er the Battle Done” on the album “The Hymn Makers: There is a Green Hill Far Away”.  (It is available on Spotify and YouTube.)

By God’s grace, we participate in Christ’s victory.  To trust Christ’s resurrection victory is to be re-empowered when and where we are most powerless, namely, when we are in the throes of Sin and Death.  In faith, regardless of the size of our church, regardless of the size of our bank account, regardless of our frailty or our strength, we are liberated from forces too strong for us.  “Death is swallowed up in victory! … Thanks be to God, who gives us the victory through Jesus Christ our Lord” (1 Corinthians 15:55, 57).

God’s rich grace be yours: “Christ is risen!  He is risen, indeed!”