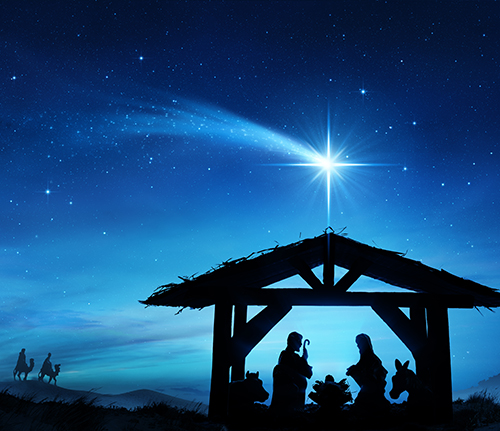 A Word to Advent and Christmas

A year ago, I would not have imagined that this year we would be in our second COVID Advent and Christmas.  As Advent now begins to fold into Christmas, we hear the voices of Micah and Mary in the Church’s lectionary readings.

First, there is Micah, who waxes poetically about Bethlehem. “You, O Bethlehem of Ephrathah, little among clans of Judah, from you shall come forth for me one who is to rule in Israel, whose origin is from of old, from ancient days” (Micah 5:2).

This promise to Bethlehem in Micah 5 flows from Micah’s declarations of hope for Jerusalem (“daughter Zion”) and all of Israel in chapter 4, even though the people are, in Micah’s words, writhing and groaning. In 2015, I visited Israel and Palestine. I did not realize until then that you can actually see Bethlehem from Jerusalem, on the other side of the distant valley. Now I see Micah’s message in a new light. I imagine Micah being in Jerusalem and from that vantage point lifts his gaze across the valley to Bethlehem, something like what Moses did, when he stood on the east side of the Jordan River and gazed across to the promised land on the other side. Both the small and the mighty are within Micah’s gaze.

Then, Micah’s message turns to hope – hope in God. God is majestic and compassionate. Even now, Micah says, God is preparing for your rescue. A new day is coming.

From the tiny village of Bethlehem, the birthplace of the legendary King David, will come a new ruler of Israel. This is not shmaltzy stuff. A righteous shepherd from Bethlehem is coming to rule on behalf of God. “He will turn the world upside down. He will take his stand, and he will shepherd the Lord’s people with the strength of the Lord, with the majesty of the name of God, and God’s people will be secure.”

Micah’s message that God will prevail and provide is not a message that can be believed lightly when a person is struggling or in trauma.

Then there is Mary.

Once, when I was a kid, a neighborhood friend Jimmy asked me, “Are you Catholic?”  On the spur of the moment, I said, “No, we’re not Catholic. We don’t believe in Mary.”

Of course, we do “believe in Mary.” Martin Luther once declared, “[Mary is the] highest woman and the noblest gem in Christianity after Christ . . . She is nobility, wisdom, and holiness personified. We can never honor her enough” (Sermon, Christmas, 1531).

Mary sings of God. Mary’s song echoes Micah’s: God provides hope and grand reversals: “The Almighty has shown strength with his arm; he has scattered the proud in the thoughts of their hearts. He has brought down the powerful from their thrones, and lifted up the lowly; he has filled the hungry with good things, and sent the rich away empty.”

At times, Martin Luther was combative in his communications. But Luther’s speaking and writing about Christmas and leading up to Christmas was sentimental – maybe “sentimental” isn’t quite the right word, but it is close. The Christmas story overwhelmed Luther. It always brought out his more reflective, gentler side.

What amazed Luther most about Mary was that she believed what God was doing – she actually, truly believed it. Luther understood the angel to be telling Mary that her child would be conceived miraculously, without sexual intercourse. Luther did not believe that miracle lightly – Luther knew as well as any of us the improbability of a virginal conception. It was a miracle. But for Luther, the miracle of the virgin birth was small compared to the greater miracle of the Virgin Mary’s faith.

Luther so often wrestled with his own faith. Maybe that is why he was so fascinated by Mary’s. In a sermon on the annunciation to Mary, Luther said, “She might have doubted, but she . . . trusted in God who could bring all things to pass, even though common sense was against it.”

I don’t know where your faith level is today. Maybe today your faith is soaring; maybe it is coasting; maybe you are clinging to faith by your fingernails or even feel that faith has slipped away. I don’t know the degree to which today you trust that God became a human being in Jesus Christ for you – and for the world – to make you a new creation in Christ, forgiven and reconciled to God and to each other again and again and again, and to usher in the grand reversal: bringing down the powerful, lifting up the lowly.

I am here to tell you that it is true, whether or not you feel you can trust this good news right now, it is true. It is true for you; it is true for all of us. Now and always.

Blessed Advent and Christmas to you!